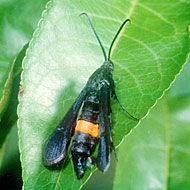 The Greater Peachtree Borer is also known as the Clearwing Peachtree borer. They will attack plum, prune, cherry, almond, apricot, and nectarine trees but they prefer peaches. It is a native North American pest that can seriously damage its host plants. The adult form is a clear winged moth with a 1¼" wingspan. The females are a dark, steel blue with a wide orange band and opaque front wings. The males are also steel blue, but they have several yellow bands, both pairs of their wings are clear, and are slightly smaller than the females.

Female Peachtree Borers lay their eggs on the tree trunks or at the base of the tree and lay 500-600 eggs on average. Upon hatching, the larvae bore just beneath the bark near the ground level and into the roots to feed on growing tissue and inner bark. Larvae are the damaging life stage of the Peachtree Borer and are reddish-brown with pale to white segments that give them a ringed appearance. Their head and thorax are dark brown to gray. Mature larvae can grow up to 12 mm long and undergo a pupal stage that lasts roughly 28 days. Once they pupate, the adult Peachtree Borer moths begin to emerge and mate in April or May and continue to do so through September.

Young trees are particularly susceptible to borers because they can damage large portions of smaller trees' vascular tissue. Since the larvae feed in galleries (tunnels bored in the wood), accumulating gum, frass and bark are generally the first signs of an infestation as the detritus is pushed out of the galleries. Older trees tend to be more resistant to borer damage, but many exhibit yellowing of the foliage, stunted growth, partial die-back and/or loss of vigor and fruit production.