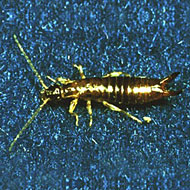 Adult earwigs are flattened insects, up to 1½" in length and light red-brown to black. Some species are wingless but others have a pair of leathery forewings covering a few segments of the abdomen and the membranous hind wings, which have the tips protruding. The forceps-like appendages at the end of the abdomen are strongly curved in the male. The female's appendages are smaller and less curved. The forceps are used primarily for defense and during courtship and cannot harm people. Earwigs are primarily scavengers on dead insects and rotted plant materials (detritivores). Some species are predators. Only a few of the winged species are good fliers. They are often transported great distances in plant materials and occasionally in other freight.

Earwigs are active at night and some species are attracted to lights in large numbers. During the day they usually find shelter beneath stones, boards, sidewalks, or debris. Earwigs are rapid runners and migrate short distances in this manner. Eggs are laid in small batches (clutches) in a chamber two to three inches beneath the soil surface. The mother guards the eggs and the newly hatched young. After the first molt, the young leave the nest and fend for themselves. They differ from the adults in color pattern, shape and size of forceps, lack of wings, and body size. The young usually mature in one season. Most species in the US have one generation per year overwinter as eggs or adults in the soil. Eggs and young require moisture. Heavy rains are detrimental to both forms, as are rapid temperature changes.

Earwigs can cause damage on flowers, vegetables, fruits and other plants, giving the leaves a ragged appearance with numerous, small, irregular holes. Preventing earwigs in your homes is best achieved by insecticide barrier treatments around house foundations.