Skip to main content
$5 Off Your First Order
*
Subscribe to be the first to hear about sales, promotions and special offers.
* For new customers only. Cannot be combined with other coupons, discounts and flash sales. Not valid on Fly Eliminators or Gift Certificates.
ARBICO Organics will be closed for Thanksgiving from Nov 24 - Nov 27.
Plan Ahead: 2022 Holiday Shipping Schedule 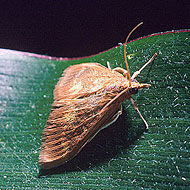 How To Control the European Corn Borer

The European Corn Borer (Ostrinia nubilalis) is a widespread pest (found on three continents) known to feed on 250 different kinds of plants, some of which include: corn, pepper, chrysanthemum, dahlia, beet, bean, potato, tomato, cotton and soybean along with many kinds of weeds. Adults are small, tan, nocturnal moths. Females have a thick body and lighter colored wings than the males, which tend to be a darker tan-to-brown color.

Adult moths typically start appearing in early spring to mate and lay eggs on desirable plants. The egg clusters can be found on the undersides of leaves and other sheltered areas that protect them from predators and harsh weather. There can be anywhere from one to four generations in a given season depending on local climate conditions and adaptation to those conditions. Once hatched, European Corn Borer larvae appear light brown to light pink in color with a brown head and dark spots on each body segment. Larvae prefer to feed on the whorl, but eventually move down into the stalk and ear as they continue to feed and grow for about 50 days. Once the larvae finish their sixth instar stage, they will pupate for a period of about 12 days.

The larvae eat leaves and tunnel in all parts of the stalks and ears with much of the major damage done to sweet corn found in the ears. The tunneling impairs the growth of the plant and diminishes yields of crop production. Early damage is typically found on tassels, whorl and leaf sheaths, but the larvae of European Corn Borers will also feed on silk, kernels, cobs and the stalk. Older larvae leave larger tunnels and their feeding habits are considered to be most damaging. European Corn Borer damage provides a pathway for fungal and bacterial diseases to become established.